Sound levels nearing the human threshold of pain, thousands of screaming fans and no, this was not your regular concert or festival, it was a live gladiatorial battle of music styles. The Red Bull Culture Clash 2014 brought dozens of world famous artists to battle across four stages through four separate sound systems. Their weapons – unannounced guest appearances, remixes specially recorded for the event, all accompanied by live mixing and bashful wordplay. We were already well aware of Red Bull’s potential in organizing innovative, record breaking events, but the Culture Clash is a case study-esque example of the resurrection and modernization of a whole event culture. 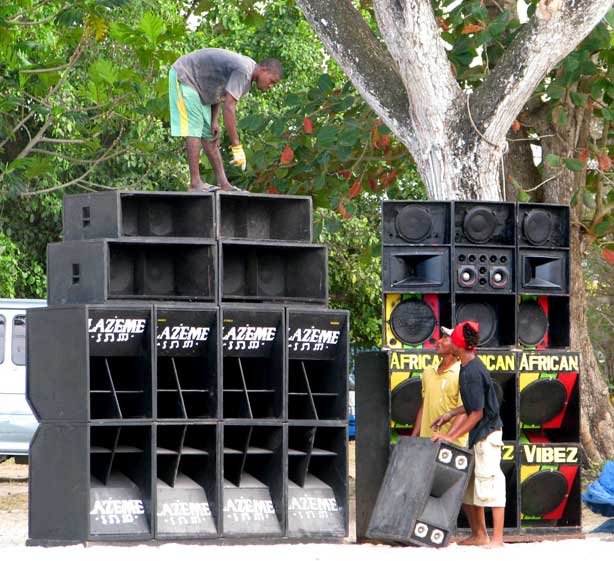 Back to the Roots

Sound Clashes date as far back as the 1950s and originally took place on the streets of Kingston, Jamaica. Before the age of reggae, the ‘selectors’ would play rhythm&blues, soul and calypso style music through the loudest sound system they could get their hands on transforming the streets of Kingston into open discos. The music sets featured specially recorded versions of popular songs (dubplates) as masters of ceremonies (MC’s) provided brash commentary on top. Much like deejaying today, the battles were about exclusive remixes, originality and of course achieving maximum crowd reaction. These sound clashes have given birth to countless artists in Jamaica and elevated them to world stardom, and not only that, it is fair to say that the clashes have formed the foundations for the countless genres and sub-genres of dance music and hip-hop we enjoy today. Though new music styles have emerged over the years and sound clash rules have somewhat changed, the battles still are and always will be about originality, exclusive records (dubplates), loud NOISE and of course getting the biggest crowd reaction in your ‘corner’.

Red Bull reincarnated the sound clash idea and catapulted it into the 21st century, and this is how they accomplished this with the Culture Clash 2014.

Being international. The event was not a regular sound clash as artists from the UK, USA and Jamaica, from the grime, hip-hop, reggae and drum and bass music scenes took part. It was truly an international “culture” clash.

Upgrading the capacity. To match their ambitions for the clash Red Bull chose a suitably sized venue. Earl’s Court arena in London has a capacity of 20,000 and yes, all tickets were sold out in advance.

Making it a sports-style competition. The Culture Clash followed clear rules like any sport would. With fixed set times, varying between the different rounds, different rules for each round and presenters serving the role of impartial referees.

Bringing new technology. Just like technology in sports nowadays is used to determine situations that are too close to call, in order to measure crowd noise levels objectively a decibel meter was put in place.

Live streaming. A live YouTube stream allowed viewers to follow the event from the comfort of their own home.

Interactivity. The Red Bull webpage where the event was streamed live also gave fans the chance to support their favourite team by unlocking “special secret weapons” for them.

At Weemss we are all about events and the ever changing event culture and that is why we were impressed by the Red Bull Culture Clash 2014, a very ambitious take on a pre-existing event scene with the modern tools to match. Let’s hope that in the future we see even bigger events and more tickets sold, of course.

Dubplate special – a new version of a record, where the artist/s have ‘specially’ added new vocals and/or sounds;

Dub-fi-dub – towards the end of the clash the competing teams enter into a song-for-song battle;

Counteraction – you are allowed to play a record twice only if you strictly mention it is a “counteraction” to your opponent;

Forward – when the crowd surges ‘forward’ towards a stage;

Want to refuel your event?

Weemss gives organizers complete control over their events, data, and revenue. Our features are designed specifically to allow organizers around the globe to make the absolute most from their events.